Last week, I tackled the last of the Intermediate Front-End Projects which involved building a TwitchTv App using the Twitch API to display the status of a set of Twitch Streamers.

These were the user stories for this project:

The design of my app is quite similar to the example app given in the project description.

The only major difference is the search input at the top of the page which I put there for the fifth user story (more on this below).

I used Skeleton to help with basic styling and responsiveness so everything looks good on desktop and mobile.

For the profile pictures, I used background images instead of <img> tags. This is because simply by setting the background-size to cover, it allows the image to scale to the size of it’s container no matter the dimensions.

This is something I learnt while working on the Random Quote Generator project and it was nice to put it to practice again here.

First, I made an array of Twitch Streamers and used a for loop to iterate through the array and make consecutive AJAX requests so that I could fetch the data for each streamer.

If the AJAX request is successful, it calls another function fetchData() which simply fetches the required data from the JSON output such as the username, status, url and display picture for each channel and calls the updateHTML() function which simply takes the data and updates the DOM.

Once I had those in place, the four user stories were completed and I was ready to go. At this point, I marked the project as completed but soon after, I thought it would be really cool to extend the functionality of the app a little bit.

This was when I added a fifth user story:

So I made a search function that takes the input of the user and uses it to make the API call:

I used a bit of regex to remove special characters and spaces from the users query leaving only numbers, letters and underscores. I think this is important because Twitch does not allow special characters (such as $, &, e.t.c) or spaces in the usernames, so it was necessary to filter those out.

It also helps so that if a user searches for something like “free code camp” (seperating whole words with spaces) instead of “freecodecamp”, it still returns the expected relevant result. 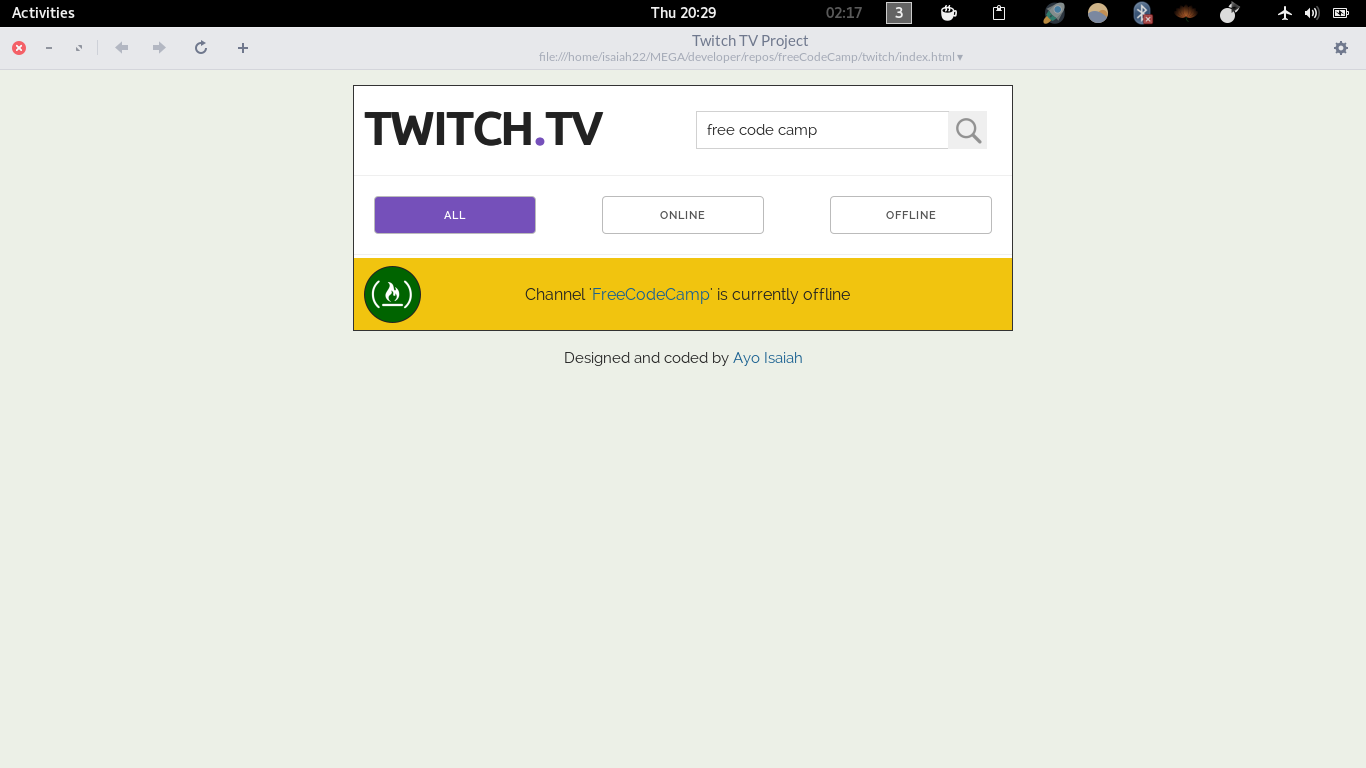 So that was pretty much it for this project. You can view the final version on Codepen.

Even as I write this blog post, several ways to improve the user experience on my app continue to pop into my head so my key takeaway from this project is:

Software is never finished. It is a process and it is always evolving.

Right now, I’m pushing hard to finish the Intermediate Algorithm Scripting section on FCC in the next couple of days so that I can quickly move on to the Advanced Algorithm section.

My (short-term) goal remains claiming the Front-End Certification by the end of May and if all goes well, i should be able to get it by then. Wish me luck.

If you want to reach out or connect with me, you can find me on Twitter or email me.